Berlin wool work is an embroidery style that is very similar to needlepoint. It is called Berlin wool work since the first patterns were issued in Berlin (in the early 1800s) and the needlework was done using wool yarn on canvas.

Today, Berlin wool work patterns are available both online and in books. Berlin wool work is normally worked in a stingle stitch, such as cross stich or tent stitch.

15 different stitches are listed for Berlin wool work in the classic “Beeton’s book of Needlework”, published back in 1870.

In the 19th century, Berlin wool work was normally carried out using many different colours. Through elaborate shading, seemingly three-dimensional effects could be achieved.

Berlin wool work is resilient to wear and tear. In its heyday, it was commonly used for furniture coverings, cushions, purses, and garnments.

The first patterns for Berlin wool work was published in Berlin, hence the name. The first ones to become available, in the early part of the 19th century, were printed in on a grid paper, using black ink only. After the printing, they were coloured by hand. They were typically sold as single sheets and were therefore rather inexpensive to buy.

When these patterns entered the British and United States market, they became a huge success there and “Berlin work” became a major trend in the embroidery world.

One important events that would boost the Berlin trend even further occurred in 1851: The Great Exhibition of the Works of Industry of All Nations that took place in Hyde Park, London that year, and where Berlin patterns were promoted. 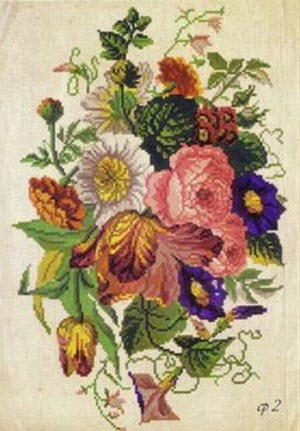 The 19th century Berlin patterns were influenced by Romanticisms and current ideals about religion and domestic bliss. Floral designs were popular, and there was also a wide range of patterns featuring imagery from the Bible or allegorical motifs. Inspirational quotes such as “Faith – Hope – Love” and “Home Sweet Home” were big sellers, and so were reproductions of Victorian paintings.

The Berlin patterns typically called for bright colours. In the 1830s, great progress had been made in the field of yarn dyeing, and this helped propel a mainstream interest in needlework since it became possible to buy vibrantly coloured yarns even on a modest budget. Among other things, aniline dyes contributed to this development.

In the 1880s, Berlin wool work became largely out-competed by new styles of embroidery, including the art needlework championed by the emerging Arts and Crafts movement.

One of the reasons why Berlin wool work fell to the wayside was that the producers of the patterns failed to recognize that mainstream tastes were changing with the times. The producers kept making the same kind of patterns as before, instead of trying to update them to better suit the new wishes of the pattern-buying public.